Stock dropped sharply on the Tel Aviv Stock Exchange on Sunday, in the wake of plummeting markets across the world that began in China and caused tumbles in Europe and the US.

According to a report from the Hebrew-language Globes website, trading reached some NIS 1.03 billion ($270 million) during the day, with bio-med and small shares leading the drop.

The TA-100, a primary indicator of the TASE that lists the top 100 shares with the highest market capitalization, showed a drop of 3.8 percent, Channel 2 reported.

The Tel Aviv stock market trades from Sunday to Thursday in tandem with the standard Israeli working week.

Meanwhile, Finance Minister Moshe Kahlon on Sunday called a meeting of industry and export leaders after figures published last week showed a slowing down of economic growth and exports in Israel.

Meeting with Kahlon at his Jerusalem bureau, the president of the Manufacturers Association of Israel, Shraga Brosh, and the chairman of the Israel Export and International Cooperation Institute, Ramzi Gabbay, agreed to set up a working group to hammer out an overall plan to strengthen industry.

“The figures that indicate a drop in the rate of growth are worrying me both as the finance minister and as a citizen of Israel,” Kahlon said. “As a great believer in Israeli industry I plan to act to strengthen and develop Israeli industry, and to aid industrialists in places where regulation is a hindrance. I am sure that the Treasury activities to support exports, together with creating a long-term assured and stable work environment will bear fruit.”

Losses of more than 3.0% on Wall Street capped the day of market carnage, which began with a 4.27% drop in Shanghai after another unnerving sign of slowdown in China’s manufacturing sector. 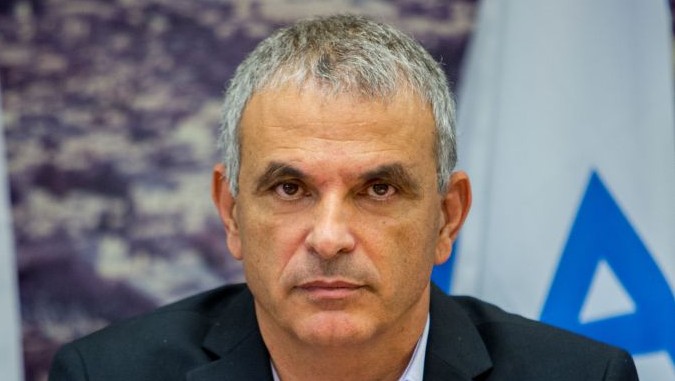 Finance Minister, Moshe Kahlon seen as he presents the proposal for the state budget for 2015 at the Ministry of Finance in Jerusalem, August 2, 2015. (Yonatan Sindel/Flash90)

The three key US indices were, after two days of heavy selling, all below where they started 2015, after repeatedly punching through record highs during the past eight months.

The blue-chip Dow Jones Industrial Average gave up 3.12% for the day and was down 5.82% for the week.

The spark to the selloff was weak Chinese manufacturing data: Caixin’s purchasing managers’ index came in at 47.1 this month — below 50 means contraction — falling from 47.8 in July and the worst reading in over six years.

But behind that were the signs that Beijing is struggling to prevent a stall in the world’s second-largest economy, and that its actions — like the devaluation of the yuan last week — was having a negative impact throughout emerging markets and would drag in developed economies as well.

The effect of the downturn in China could be seen in the hit on specific US blue-chip stocks with large China business: Apple lost 6.12% on Friday; General Motors slid 4.0%; and Boeing lost 3.88%.

Meanwhile oil prices slid to six-year lows during trade Friday in part on big importer China’s weakness, the impact spilling over to the shares of oil industry businesses.

In New York, some analysts called the fall a long-needed correction in shares whose valuations — especially for tech companies — were pushed too far helped by the continued supply of cheap money from the leading central banks in Tokyo, Beijing, Frankfurt and Washington.